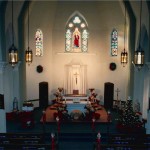 1856 – St. Augustine Church completed and dedicated. This is the present rectory.

1870 – St. Augustine Church made a mission church of Ansonia

5/4/1888 – Ground is broken for a new church and on July15th a cornerstone of a new and larger church is laid and blessed by Bishop McMahon. This new church was of wood and was 53 by 101 feet with a spire 118 feet in height. There were dials on the four sides ready for a clock to be installed. The seating capacity was 600 people. Cost of the new church was $13,000.

5/18/1890 – Formal dedication of new Church. The old church building is converted into the rectory. The congregation is a mixture of Irish, Polish and Germans.

1891 – The church congregation has grown to 700 parishioners. Of these 600 reside in Seymour and the remainder live in Beacon Falls and Oxford

4/01/1894 – Rev. Michael Rigney named as the third resident pastor until 1919. The Church basement is renovated and the cemetery improved.The Church population has grown and the parish is divided as St. Michael’s in Beacon Falls is built to accommodate residents from that area who are parishioners.

1936 – Rev. William F. Casey becomes the seventh pastor of the parish.The church interior sees the installation of new altar, new lights, pews and Stations of Cross. The Sanctuary is enlarged and the tolling bell is removed from tower and the tower’s height is cut back. The church census now shows a greater influx of Polish and Slovak parishioners.

1957 – Rev. Callahan purchased property across from Church. Originally intended to be used as convent.

1967 – Congregation divided into 2 parishes – Church of the Good Shepherd formed on West side of town.

1968 – Rev. Bradford Colton named the ninth pastor (1968-1987). The Church interior is redecorated and the basement renovated. A handicapped ramp installed on the north side of the Church building.

2005 – Major renovations are made to the interior of the church including restoration of plaster and wooden walls and stain glass windows, existing statues of Mary and Joseph are restored, repairing and painting of the ceiling, refinishing of the pews, rewiring of lighting and some up-dating of the electrical systems was done. A new main altar with a white marble freeze of the Last Supper were added along with a new tabernacle were moved back to the center of the sanctuary. A mural of St. Augustine and St. Monica is painted onto the wall, and a hanging crucifix is hung over the main altar. A handicapped bathroom was also added to the vestibule of the church